Kevin’s advocacy expertise was evident when he led a campaign to defeat harmful window warranty legislation in Connecticut that secured a veto from Governor Malloy, one of only four bills to be vetoed that year. NLBMDA and NRLA actively opposed the window warranty legislation in Connecticut. In addition, he successfully worked with the United States Trade Representative’s (USTR) office in 2018 to remove several Chinese products used in the building industry from a list subject to a 25% tariff, and was successful in lobbying for several LBM priorities as COVID-relief legislation passed in 2020. Over the course of his career, he has developed and strengthened critical relationships not only with congressional offices but also at federal agencies such as OSHA and EPA, which is critical to NLBMDA. Kevin also works closely with other influential trade organizations and participates in several committees and coalitions.

Prior to joining NLBMDA, Kevin worked in government affairs for the Self-Insurance Institute of America and as a legislative staffer in the U.S. Senate.  He holds a bachelor’s degree in Political Science from Central Connecticut State University, where he was an ROTC cadet and enlisted in the Connecticut Army National Guard.
Speaking At
Welcome & Opening Remarks | Government Affairs Update from Washington D.C. 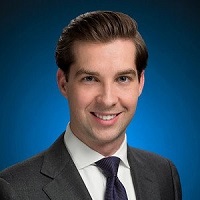