Full Name
Linda Alvarado
Job Title
Co-Owner of the Colorado Rockies and President
Company
Alvarado Construction
Speaker Bio
Linda Alvarado is president and CEO of Alvarado Construction, Inc., a commercial general contractor, construction manager, development, design/build, and property management firm. Based in Denver, the company has offices in several states and has successfully developed and constructed projects across America and internationally. Alvarado has 30 years of experience in commercial development, government and institutional general contracting, construction management, design/build, and program management contracts.
Alvarado made history as the first Hispanic (male or female) owner of a Major League Baseball franchise. As an owner of the Colorado Rockies, her role is also significant as it marked the first time that any woman was involved in a bid for ownership of a Major League Baseball team. She has been the focus of many articles in newspapers, books, business publications, educational curriculums, and civics texts; has graced the cover of several national magazines; and has been featured in numerous media broadcast productions. Alvarado has set high standards as a successful business owner and her accomplishments have opened doors for women and minorities to enter new careers.
Alvarado began business as a concrete contractor and was also the principal of a construction management firm that provided the full range of development and program management and construction management services from project concept through budget models, design, cost estimates, scheduling, construction phase, and project closeout.
Speaking At
Welcome & Opening Remarks and General Session Keynote 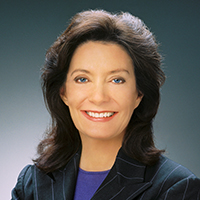